Hi!
While I was salivating at the 3.9 beta on the http://esotericsoftware.com/spine-changelog#v3-9-00-beta page, I suddenly noticed that "the" curve editor is planned to live in the graph view? Is that a typo?

This worries me, as I think everybody requesting the feature means for it to live in the dopesheet, right next to the keys they connect.

Maya and After effects have these great views that combine keys and curves in a super intuitive way. Here's hoping we get a similar experience in Spine, and not two separate windows for curves and keys.

So my questions here are these:
• Hi fellow Spine user, where do you think the curves should be?
• Dear esoteric, where will the curves be?

Thanks for having a look!

The curve editor will replace the graph view. Merging the curve editor and the dopesheet, where you can only use one or the other at once, is limiting and IMHO not a great UX choice in other software. I also don't believe it makes sense to embed curve editing alongside rows in the dopesheet. It is better done in a separate view so you can use both at the same time, with the option to link the views for scrolling/timeline zooming.

Just bring that view even in separate program

And I like how Spine solved his UX so far so let's see how it is. Any estimation when can we play with it Nate?

We have the foundation laid (necessary changes in runtimes and editor) and some basic UI that allows for editing the curves. Unfortunately it's not quite ready for the beta. We need to be quite sure of the project file format changes since once people start saving project files, we have to support opening those with any later version. Mostly though it needs to work correctly in all situations, where currently there are some cases that aren't yet handled. For example, moving keys past other keys needs to have sensible behavior regarding how the curves are adjusted. Anyway, how long will it be? I wish I could say! I could hope to start the beta in a week or two, but don't hold me to that!

The graph itself works like the viewport mouse zoom, but also has a timeline and transport controls like the dopesheet. We have a few modes when manipulating keys to decide how the curves are adjusted and we'll have lots of other useful tools in the end. We won't hold back the first beta for such niceties, we just need the basics to be reasonably solid.

The graph is super exciting! It of course makes animating both easier and higher quality. Plus we've improved a number of things about the runtimes (the commits can be seen in the 3.9-beta branch), such as just generally being more efficient, changes that allow us to increase the number of different types of timelines, and to have multiple curves for a single key. This allows you to have separate curves for RGBA or XY, even when those properties are keyed combined. Yes, settle down, we'll allow you to key them separately

RE: foundation: this sounds like there will be full curves, spanning multiple keys, and that takes away my worry. Thanks!

RE: choosing / pinning: that will make someone I know (my former colleague) SUPER happy

Here, take all of our hopes as your wings, and fly!

Ah, now I understand your worry about the graph editor. While the old one showed only a single segment, the new one shows multiple keys and curves. It'll be super cool, don't worry!

I hate to show janky, work in progress UI, but here's a translate (XY combined) and a rotate timeline: 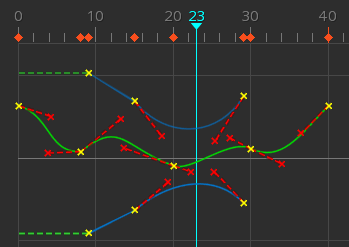 But try to to ignore the programmer color scheme! 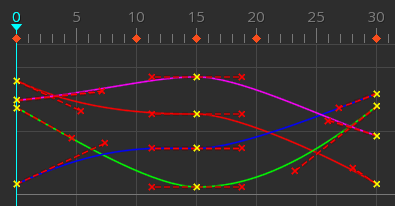 HYPE! Please note that it will take a while before all runtimes will be updated. The curve editor requires quite substantial changes of the runtimes under the hood. So don't use the 3.9-beta in production from day 1 please!

That preview legit got my heart rate up

<3
The future is bright!

Just being curious how things are going? Did you get any closer to relase this beauty?

A bit frustratingly, to be honest. For various reasons we had to change focus to work on some architectural changes. What was intended to be a minor detour turned into a can of worms, needing more effort than expected. Long story short, Spine will move to 64-bit, which allows access to all the available RAM on your system. Currently it is 32-bit and limited to ~1GB. Spine is very efficient and we've gotten quite far with < 1GB of RAM, but it will be nice to remove that limit. Along with that comes a number of other nice improvements, including a new launcher that is a bit smarter and has more features, such as choosing the version and language before getting into Spine.

Never fear though, the curve editor will definitely be in the next version. It's much too far along to go back now. We'll keep working hard to get it done and as soon as we have it polished enough, we'll start releasing beta versions.

Oh well, good luck then. I hope you guys get some sleep time to time

I love Spine2d every day more

let me know were i will get spine 3.9 beta version for testing

@karan, it'll show up in the changelog on the welcome screen in Spine: 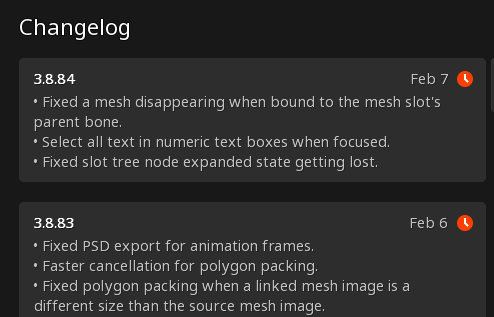 thank you Nate .let me know when spine 3.9 releasing for public